Does this caption make sense with this picture?

Point to the donkey

Sure! Just point to the donkey and not one of the horses. But how about here? 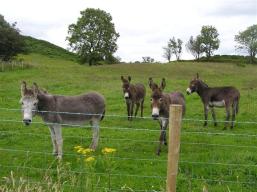 Point to the donkey

Not so much. It’s weird to talk about the donkey in a picture with more than one of the majestic creatures. Perhaps, we might reason, a phrase of the form “the X” only makes sense in a caption when there is only one X in the picture.

Not so fast! What about this picture and caption?

Every man on a donkey has his legs around the donkey

Here, the phrase the donkey sounds OK even though there are four donkeys in the picture. How should we change our analysis of “the X” phrases? Well, Irene Heim (following Steve Berman) suggests that the word every makes the difference. Such words (known as quantifiers) allow us to zoom in until we just see one man on a donkey, like this:

This is Heim’s solution to a problem pointed out by the philosopher Peter Geach via the following somewhat sadistic example:

Every man who owns a donkey beats the donkey.

One question this example raises is: what about a man who owns more than one donkey? Does he beat them all? Well, imagine a picture containing all male donkey-owners next to the donkeys they own. Heim suggests that for each man, we can zoom in one time for each donkey he owns. In other words, Geach’s sentence means something like the following:

Every minimal situation involving a man and a donkey he owns represents a case where the man beats the donkey.

This is brilliant solution to the problem, but I think there might be a small problem in Heim’s analysis. Consider the following modified version of Geach’s sentence:

Every man who owns exactly one donkey beats it.

This sentence intuitively means something different than Geach’s original: for instance, we no longer care whether men who own two or three donkeys beat them, we are only interested in the men who own one donkey total. However, here is what I think Heim’s analysis would yield for this sentence (since the only difference is changing “a” to “exactly one”), with the new part underlined:

Every minimal situation involving a man and exactly one donkey he owns represents a case where the man beats the donkey.

I plan to use this blog to post short pieces on linguistics, especially semantics, the study of linguistic meaning.  Some posts will be original thoughts and research ideas, while others will simply highlight existing work and ideas.  To start things off, here is a collection of quotes I enjoy on semantics, followed by a photo of my dog.

We think of meanings as what synonyms (or translations) have in common, what ambiguous expressions have more than one of, what meaningful expressions have and gibberish lacks, and what competent speakers grasp.”

What is meaning? It is not easy to tackle a question like that head-on; and while it’s an important question to keep wrestling with, a total answer is not required in advance of doing fruitful work on semantics, any more than biologists wait for the answer to the still-difficult question ‘what is life?’ before getting down to work.”

This analysis is a bit … ruff!